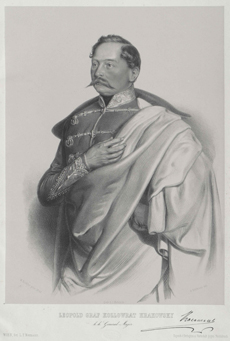 He pursued his military career, initially very successfully. His officer career culminated when he attained the rank of field marshal. He became the right hand of Jan Josef Václav Count Radecký from Radeč in the 18th Infantry regiment. For success, bravery and heroism, particularly in the Battle at the River Vau, he became Knight of Marie Terezie Military order, 2nd grade Knight of the Russian St. George order, commander of the Bavarian civil meritorious order and of Tuscan St. Joseph order. He was Imperial-Royal chamberlain and then the governor of Venice, which was extraordinary honor but also a very lucrative position.

In Venice he fell in love with Polish classical dancer Natalie Blaszezyńská (August 9th, 1828 in Warsaw – January 17th, 1861 in Pau, France), daughter of Josef Blaszezyńsky and Tefila Berta Ritterbondová. German Gothaj almanacs refer to her as „aus russ.Adel“, which is rather „pium desiderium“, because otherwise the later difficulties would not occur. He married her in Venice on June 11th, 1850 without asking the permission of the Empereor. Therefore, he was called back to Vienna and dismissed from the Venetian governorship. He was then sent to Hungary to suppress the Kossuth´s rebellion. Before the journey, he sold small famr in Morava and he took the gold and silver coins with him in iron chest. He was attacked and robbed by the rebels. In addition, his Hungarian mission was not successful and so he returned to Vienna defeated, ill and depressed. He retired at the age of fifty-eight.

Due to his debts he was threatened with jail. He got to the hospital for impoverished soldiers, which was humiliating for him. His friends pleaded with the Emperor Franz Joseph I. and at his command he was transferred to more dignified hospital, where he died four days later. He was buried in Währing, Vienna.

Count Leopold Kolowrat could have even been deprived of his family membership because of his marriage. His relatives in accordance with Family provisions in case of marriages, sued him at provincial court. Their complaint was rejected on the ground that the Civil Code provisions have greater legal power then the family provisions. Kolowrats appealed to a higher court, but their complaint was rejected again and the court upheld the judgment of the first instance.