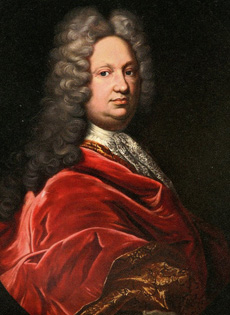 Count Filip Nerius was enterprising and very successful financially. In 1748 he purchased the estate of Světlá nad Sázavou with 17 villages from Antonia, countess Czernin of Chudenice. In 1752, he was granted the privilege to cut Czech garnets on this estate, from Empress Maria Theresa of Habsburg, and in that same year he established the very first garnet cutting shop for Czech garnets in the land. This venture provided a livelihood for many people on the Světlá estate. In the mid-18th century, he then purchased the building named “U Otčenáše” (parcel no. 349–III) at 15 Vlašska Street, in Prague.

Filip Nerius served as Vice– President of the Czech Chamber, appointed by Emperor Charles VI. Among other things, he was in charge of the dispute between creditors and Karel Kajetán, Count Buyuoy. He also succeeded in gaining a position on the Board of Governors. Count Kolowrat thus witnessed the political crisis when Karel Albrecht Bavarian was declared king of Bohemia. On December 19th, his lords and knighthood paid him tribute, including Philip Nerius The new king appointed a seven– member court deputation under the direction of Philip Nerius, who was made the president of this board of governors of the country. Meetings of the deputies took place at the Kolowrat Palace on the Malá Strana.

During the wars for the Austrian heritage, Filip Nerius had to confront the French troops. Upon their retreat from Prague, the French took several hostages, including Count Kolowrat. They released the hostages in Cheb and Marie Theresa appointed a commission to decide the guilt or innocence of the nobles. The Kolowrat line was also represented in this commission of inquiry, in the person of Count Ferdinand Alois. The Commission found Count Nerius innocent and evaluated all his actions as acts forced by unexpected circumstances.

Count Nerius gained the trust of the new ruler, and on October 17, 1748 she appointed him as the highest Prague burgrave. Thanks to this, he became a patron of a number of Prague churches, which he duly cared for. In 1752 he donated 100 gulden to the church in Košíře, and in 1754 he allowed the recasting of the bell in the church of St. Peter and Paul in Budeč, at which he also appointed the administrator seven years later. In 1755, Marie Theresa established an administrative estate in Karlstejn and, appointed Count Philip Nerius and Václav Netolický of Netolice, as commissioners who were responsible for the repair of buildings and furnishing of chapels. In addition to the Czech burgrave palace, in 1758 Count Nerius bought the Cibulka manor house. Maria Theresa allowed Count Philip Nerius to represent her at the eighth celebration in Prosek. Count Kolowrat presented the Queen's gifts, casulet, dalmatic and pluvial.

In 1755 he bought the Hlaváčova Lhota estate from Jan Václav Mladota of Solopisk. Two years later, he built a baroque chateau surrounded by a park on the site, and the family emblem of Count Philip Nerius was placed on the façade. Unfortunately, this chateau was demolished in 1967. In 1759, he purchased the castle, courtyard and the village of Radovesnice from Maxmiliana Schaffotská. He had the chateau was repaired in Baroque style because it had been badly damaged after the Battle of Cologne. In 1760 he bought the court of Šintlochy, which he liked very much, and therefore renamed it as Filipov (Philippshof). He had the original chapel rebuilt into a Baroque chateau. Near Čáslav, he bought the manors of Jeníkov and Hostačov in 1766, relocating to Hostačov chateau. In Jeníkov he built a building for a state tobacco factory in 1769. This building bore the sign of "Old Chateau".

The Krakow's of Kolowrat spouses died within thirteen months of each other, and both were buried in the Barnabit Church of St. Benedict in Prague in Hradčany, where their tombstone has been preserved to this day.