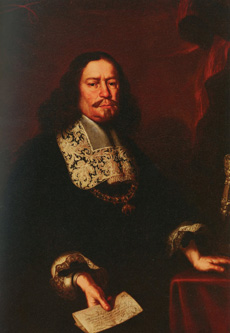 František Karel I. was the firstborn son Albrecht II. Kolowrat-Liebsteinský (1583-1648), the founder of the older Rychnov branch of the family, Imperial Court Council, Imperial Chamberlain, German Vice-Chancellor and the governor of the Kingdom of Bohemia and Sabina Victoria, Baroness von Wolkenstein-Trostburg (1596-1684). He studied in Prague and by 1642 he had already become the council of a chamber court. In the years 1647-1648 he was the governor of the Hradec Region. Count František Karel I. was very gifted, and he had the emperor's trust, and therefore he was sent to the uneasy election of Leopold I as Emperor in the years 1657-1658. It was one of the most difficult elections, as it lasted for almost a year. On this diplomatic journey, he kept a journal written in German, which is still an important source of information relating to this event.

From August 1657 to March 1658, the Czech royal mission took part in the election meeting in Frankfurt am Main, representing the Czech King as one of the electors. It was headed by two leading Czech nobles, Václav Eusebius, the Prince of Lobkovice, the Duke of Zaháň and Count František Karel I. Kolowrat-Liebsteinský. If the voting negotiations had progressed rapidly, they were supposed to have given their vote to the Czech King, Archduke Leopold. They were also supposed to try to obtain access to the preparatory meetings of the electoral college, in which the Czech kings had not been participating for over 100 years and from which they were now excluded (unfortunately, they did not succeed). Leopold I. was eventually elected Emperor.

Shortly after his return, Count František Karel was sent as an imperial ambassador to Warsaw. Here he was to negotiate peace between the Poles and the Swedes after the defeat of Swedish King Charles X. Gustav (1622-1660) in the so-called First Northern War. Peace was agreed in 1660 in Oliva, where the Count was present.

For his diplomatic achievements, on July 20, 1658, Count František Karel I. together with his brothers, was promoted to the status of Imperial Count, and subsequently on November 8, 1660, he was also awarded the status of Czech Count.

From 1661-1667 he was president of appellations, became a Chamberlain and Imperial Privy Council, and from 1667-1700 he was a regional governor in Moravia. In this office, he achieved considerable success. His 33-year term of office has made him the longest serving executive in this function in history. His term in this office is commemorated by the ceremonial sword of the governor of the Moravian Lands, which the count received from Emperor Leopold I. It can be viewed in the exhibition at the chateau in Rychnov nad Kněžnou. For his accomplishments, he was made a knight of the Order of the Golden Fleece by King Charles II. of Spain on December 6, 1688.

Prior to taking over his own inheritance from his father in 1647 he became the guardian of the minor siblings of his first wife, and up until 1658 he managed the Častolovice manor on their behalf. In 1648, he inherited the estate of Rychnov nad Kněžnou from his father, in addition to which he purchased the estate of Chroustovice near Chrudim in 1663, where he had a chateau built. In 1674, he additionally purchased Černíkovice and other estates. He created an entailed estate from the Rychnov nad Kněžnou, Černíkovice and Borohrádek manors. In 1676, he purchased Deštné in the Orlické Mountains, thus acquiring an old glassworks, in which, in the years 1660-1760, luxurious Baroque glass was produced, so-called Kolowrat crystal. Several prominent artists, such as the glass and porcelain painter Ignacio Preissler, contributed to its production and decoration.

As a Moravian governor, he was obliged to own a homestead in Moravia, so in 1668 he bought the Líšeň manor near Brno (today the Brno-Líšeň district). However, he did not pay attention to the Líšeňský Renaissance chateau, he mainly resided in Brno where he rented the most important city residence, the Dietrichstein Palace on Zelny trh square.

The Count decided to build a new, representative estate in Rychnov nad Kněžnou. The construction of the Early Baroque Chateau began in 1676 on a slight slope below the Church of the Holy Trinity. After his death, his son, Norbert Leopold, finished its construction. In addition to the construction of sacral buildings on his own estates, Count František Karel was a patron of the Catholic Church in various places in Bohemia and Moravia. He financed the eastern facade of the Marian Chapel on Svatá Hora near Příbram, and, at his own expense, he also had a chapel built on the pilgrimage route from Prague to Stara Boleslav as well as the chapel of St. Laurence in Karlovy Vary. For the sum of 1,000 zloty, he bought the altar of St. Joseph in the Pilgrimage Church of the Visitation of Our Lady at Svatý Kopeček near Olomouc. Count František Karel I. also contributed a sum of 1,000 zloty for the construction of the church of St. Nicholas in the Lesser Quarter, which was mainly supported by Count Václav Kolowrat-Liebsteinský (1634-1659). That is why there is a large coat of Kolowrat arms on the frontage of the church and inside, in the chapel of St. Anne, one finds the Count's tomb.

Count Franz Karel I. married twice. He married his first wife, Magdalena Ludmila of Oppersdorf (1625-1672) at Hradec Kralove in 1646 and had eleven children with her. His second marriage was in 1673 to Isabella Clara Cecilia Countess Nogarola (1630-1691), of Portuguese nobility, and was childless. Of his 11 offspring, the family was continued by the son Norbert Leopold (1655-1716) and, also in this line, his nephew Jan Norbert, the son of his brother Leopold Oldřich.