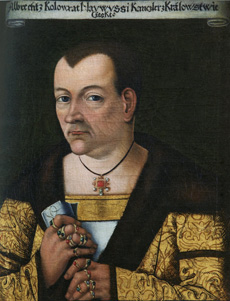 Being the only son of Kateřina of Sternberg and an important canon Hanuš II of Kolowrat († 1483), he belonged among the most prominent politicians of the era. He married Anna of Kovárna, a childless widow of Hynek of Wallenstein, but their marriage also brought no children. Albrecht’s career developed especially well. He became an advisor of the King Vladislaus II of Hungary, a burgrave of Karlštejn (1496 – 1497), and the Supreme Chamberlain of Bohemia (1496 – 1502). His career peaked between 1503 and 1510 when he held the prominent function of the Supreme Chancellor of Bohemia. He was the King’s loyal servant, which unfortunately played a role in the deterioration of his relationships with his family and friends.

In 1504, Albrecht II attempted to consolidate the relations between the Kingdom of Bohemia and the Silesian estates. This brought him a great admiration from the King Vladislaus II of Hungary who considered him as his successor in governing Bohemia. However, Albrecht’s actions and behaviour fostered antipathy among high-ranking land and court officials, so he started cooperating with the royal cities. These Bohemian cities were an inalienable part of the royal estate with economic rights that rivalled the Bohemian nobility and whose citizens were granted a special social status. He hoped this move would improve his political influence and in 1507, Albrecht II. Liebsteinský of Kolowrat and the royal cities established a contract of reciprocal help.

This era verged on anarchy. The King’s seat was in Buda and the nobility fought with the cities over power and even descended to robberies. At the Royal court, the nobility often slandered Albrecht II so that his influence was diminished. This animosity peaked in 1508 and lead to Albrecht’s fall. Upon the decision of the Jacobian Congress, all his domains were granted to Zdeněk Lev of Rosenthal, a powerful noble man of high ambitions. Albrecht II, however, stayed in the King’s good graces and in 1509 was given the Bělá Castle with estates that the King confiscated from the house of Gutstein. In 1510, Vladislaus II appointed Albrecht II as a chancellor of Bohemia, but in the same year, Albrecht II unfortunately died, leaving no heirs.

Albrecht II also rose to fame thanks to his endeavours of changing the confessional state. In 1505, he signed a treaty of noble families against the Unity of Brethren. This military union was also signed by Petr of Rosenberg, Jindřich IV of Hradec, Zdeněk Lev of Rosenthal, Petr of Sternberg, Jan of Schwanberg and Strakonice, Jan of Kolowrat and Mašťov, Jan of Kolowrat and Nový Hrad, Jindřich of Kolowrat, Jiří of Kolowrat, Mikuláš of Kolowrat and many more representatives of other influential nobility. As the supreme chancellor, Albrecht II. opposed the Unity of Brethren and all radical religious movements, searching rapprochement of Utraquists with Catholics.

Thanks to his skilfulness, Albrecht II managed to expand the wealth of the family as he acquired extensive property. Among others, he possessed the estates of Liebstein, Perštejn, Mělník, Kladruby, and Krupka. He also owned the manor of Lovosice with Altzella Abbey by Dresden, where he was later buried. Since his marriage with Anna was childless, he left his possessions to his stepsons from Anna’s first marriage, Bernard and Jan of Wallenstein.