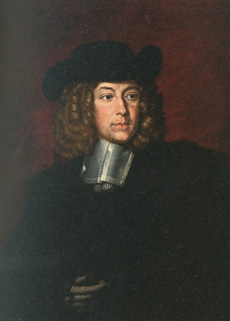 Václav was the son of Zdeněk Lev, Count Liebsteinský of Kolowrat (1588 – 1640), the chamberlain of the Archduke Leopold V. of Tyrol and colonel, and of Helena Berková of Dubá and Lipá (died in 1632). Albrecht von Wallenstein, the Imperial Generalissimo, became his godfather. Right after his birth, the count was dedicated to God by his father who wanted him to join the Society of Jesus. Count Václav therefore became an example of heightened baroque religiousness, thus earning the moniker “the Czech Aloysius Gonzaga”.

First, he attended the Jesuit grammar school at Lesser Side in Prague and became motivated to preach the gospel to nonbelievers in Asia or America under the impression of tales of the acts and martyrdom of Jesuits all around the world. The rector of the Prague college refused to let him join the order for he belonged to a wealthy noble family of counts. Count Václav asked the Emperor Ferdinand III. to let him donate his whole property to the Jesuits, which made it possible for the count to be accepted into the order. This happened on 22nd October 1650, when he was allowed to join the novitiate in Brno, where he had been brought by the renowned philosopher and theologian Rodrigo de Arriaga (1592 – 1667). He went on to study philosophy in Olomouc and Prague.

Václav was very gifted and pious, setting an example of extreme baroque religiousness. He spoke perfect Czech, German, Italian, Latin and Greek and was able to read the Bible in Hebrew, He wished he could stop using the name of Kolowrat to avoid being privileged, but his priors did not let him do so. After his studies, he did not want to pursue a career in Bohemia for fears that he would have to accept an honorary position in land administration.

In 1654, Václav, Count Liebsteinsky of Kolowrat forewent all his property on behalf of the Society of Jesus and decided to live in poverty. He dedicated all his funds to the construction of St. Nicholas Church in Prague and the professional house at Lesser Side in Prague and to the establishment of the Kolowrat tomb with a new tin coffin for his deceased father. The funds amounted to 178,500 guldens, 50,000 of which was the price of the Střela and Hoštice manors which he had inherited from his childless uncle Oldřich František, Count Liebsteinský of Kolowrat, and 31,000 guldenswas an estimate of the price of the Sloup, Konojedy, Řepice and Starosedlský Hrádek manor.

In 1658, the young count commenced his studies of theology in Rome, where he raised great expectations thanks to his talent and enthusiasm. Unfortunately, he died of typhoid fever as early as on 6th October 1659 at the age of 24, when he began his second year of studies. He was buried in St. Ignatius Church in Rome, under the chapel of St. Aloysius Gonzaga. His name can be found in the gallery of prominent Jesuits of Czech origin in the refectory of Clementinum in Prague. His most notable legacy, however, is St. Nicholas Church at Lesser Side in Prague which he had built „Ad Maiorem Dei Gloriam“ – to a greater glory of God.