The Kolowrat Coat of Arms 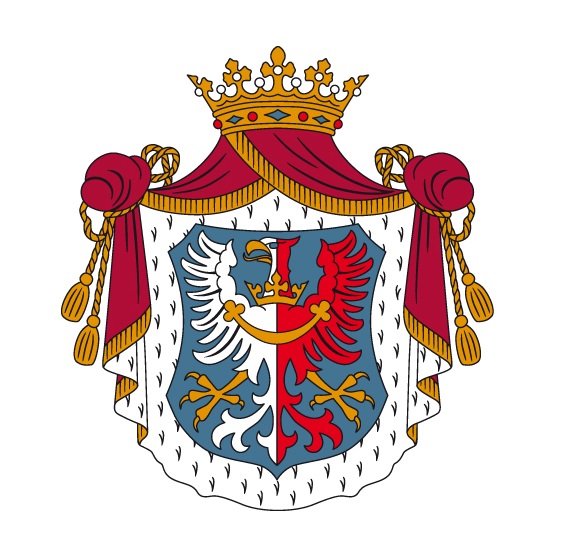 Origin of the Coat of Arms of the Lords of Kolowrat

František Palacký, in his History of the Czech Nation in Bohemia and Moravia (Praha 1921) introduces on pgs. 238-239 the Janovic family tree, from which the lords of Janovic, z Winterberg, Adlar, Žirotín, Žďár and Kolowrat all hailed. In doing so, he cites the Chronicle of Dalimil, who in Chapter 22 specifically introduces the family sign of the EAGLE. The lords of Kolowrat are thus first named in the year 1347 (Albrecht Sr. of Kolowrat). He is documented in the years 1347-1391. He is introduced as Albert, and on his seal from the year 1378 (Sedláček, August: Atlasy erbů a pečetí české a moravské středověké šlechty, Academia, Praha 2003, sv. 1., 169r – 170v) as well as on the seal of Albrecht Junior of Kolowrat (1469-1416) from the year 1388, the coat of arms symbol is clearly an EAGLE. Theories of a different original figure on the coat of arms have no basis in historical materials.

Form of the Kolowrat-Krakowský Coat of Arms

Instead of the traditional form of the family coat of arms (which is a shield with an eagle, topped by a crowned helmet with mantling and a crest), the current members of the Krakowský of Kolowrat family have chosen a different variation – the family coat of arms laid on an ermine cloak topped with a crown. Similar signs are traditionally used by other noble families, such as the Wratislavs of Mitrowicz, House of Zierotin, Waldstein – Wartenbergs, etc. The cloak does not express a princely state (as seen by the absence of a princely crown on top), but the antiquity and nobility of the family.