The Ride of Saša Kolowrat 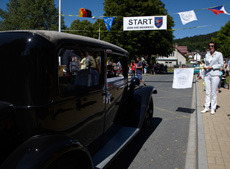 Every second year, the centre of the town of Přimda comes alive with the sound of historic cars. Historic car lovers gather here in honour of the legendary racing driver, artist and philanthropist Count Alexandr "Saša" Kolowrat-Krakowsky. The event is organized by Auto moto veterán club Český les. Its Director, Mr. Antonín Hoffmeister describes the route of the international ride: “The drivers go from Přimda to Bor, Stráž, and through Borek, Dubec and Třískolupy back to Přimda. There is a break and then the second stage begins. In the second stage of the route the drivers go down to Rozvadov, cross the old border to Waidhaus, where there is another break, after which the drivers continue to Georgenberg, Woppenrieth, Waldthurn, Pleystein and through Lohma back to the border. ”The drivers have 5 hours to complete the race. “We want our participants to discover the beauty of our region.” adds Hofmeister.

The most beautiful classic cars can be seen along the route, such as the 1924 Opel Laubfrosch of Werner Pugel from Olešnice and from the vintage category (pre 1945) e.g., Walter, Tatra 54, Aero 30 and 1000, Praga Piccolo and Alfa 6 or Škoda 633 including Mr. Vilém Šimáček from Domažlice driving a 1927 Praga BD 500.

JUDr. Dominika Kolowrat-Krakowská and their children Maximilian and Francesca are also big fans of the Ride and the Club. They take an active role in every year of the ride.