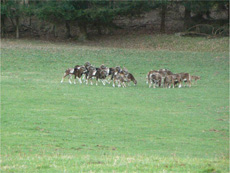 The game park Diana was established between 1995 and 1996 in order to diversify the game animal species in the territory of the Kolowrat woods. The game park is situated to the south-west of the Hunting Lodge Diana, on the site of the original stone quarry. The size of the game park is 25 ha, of which 22 ha consist of forests and 3 ha of meadows.

The game park is situated on the southern hillside, which ensures all day sunshine. The forest in the southern part of the park consists mainly of spruce and small groups of alder trees. The northern part is covered by mixed forest where one can find alder, ash, maple, chestnut, oak and spruce. The meadows are used for grazing. There is a spring in the upper part of the game park, which delivers water to the game animals.

Although the game park is quite small, we have achieved excellent breeding success. The mouflon trophy valued at 227,00 CIC ensures high quality breeding.

The Game Park Diana on www.myslivost.cz