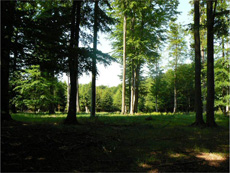 About 70% of the landscape is afforested, which alone demonstrates the philosophy of the forest management. The number of vegetation days per year is 140, the average annual temperature is 6 – 6,5°C, while the average annual precipitation is 700 - 800 mm, which means optimal conditions for natural forest regeneration, mainly for spruce and beech. The woods consist mainly of spruce ( 76% ), pine and beech (6%), and other wood species (5%), such as larch, fir, birch and maple. The genetic classification of the forest cover is higher than average (there are no low-quality forest covers of Category D).

The forestry was badly affected by windstorms in 1984, 1990 and 2007, which caused extensive damage, meaning that it will take years of professional care to fully restore the forest to its original state. Clearings caused by salvage harvestings are being successfully reforested, mainly thanks to the production of the forest’s own planting material. To secure the stability of the new forest cover the administration of the Kolowrat Forests places great emphasis not only on the required share of ameliorative and damage-resistant wood species, but also on their placement. The subsequent protection of the young forest cover is also very demanding.