The Chapel of the Virgin Mary 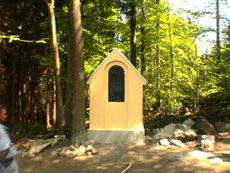 The small chapel stands on the northern hillside under the ruins of the Přimda Castle, away from all roads. According to locals, at the beginning of the 20th century a statue of the Virgin Mary stood on the very spot. The statue was built by a certain German peasant from Újezd under Přimda, supposedly as an expression of thanks for his daughter’s salvation. He later built a chapel to protect the statue after it had been damaged by a storm. After the expulsion of the Germans, the chapel began to fall into disrepair, and was completely destroyed in 2007 by hurricane Kyrill. Part of the chapel was destroyed by a fallen tree. Mrs. Dominka Kolowrat-Krakowska has reconstructed the chapel, which now awaits the return of the Virgin Mary statue.