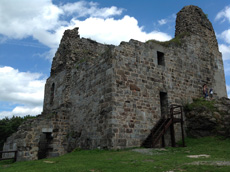 The ruins of the ancient Romanesque castle, which is believed to be the second oldest stone castle in Bohemia, after the Prague Castle, towers over the town of Přimda, in the heart of the Kolowrat woods. Chronicler Kosmas states, that in 1121, a certain German knight built a castle here, which was later conquered by Prince Vladislav. The first reference to the castle comes from 1126, when Prince Soběslav repaired the castle and built a tower as part of the fortification. From that time the royal castle served to defend the Bohemian borders. It also occasionally served as a prison. Its guests even included some Czech rulers who suffered the hardship of the royal prison – e.g., between 1148–1150 and 1161–1173 the future Prince Soběslav II. was held prisoner here after unsuccessful attempts to overthrow his brother, and in 1249 also the future King Přemysl Otakar II.

During the reign of the Luxembourgs the first forfeits of the castle took place. Until this time the castle had been administered by the Burgraves. In 1318 the castle came into the possession of the powerful Vilém Zajíc of Valdek. Another owner of the castle, the Borš of Osek, was a robber and under his ownership the castle became a robbers’ den. During the punitive expedition of King Václav, over 30 robbers were caught near the castle and later hanged in Prague. However, the castle and its leader escaped capture.

In 1429 the town of Přimda was besieged by the Hussites, but stern defence from the castle forced their retreat. Between 1454–1590 the castle was possessed by the Švamberks, (who were at odds with the Chods of Přimda). They abandoned the castle in 1580 and let it fall into ruin. The castle and the estates were subsequently sold in 1593 by Rudolf II., who needed money for his war against the Turks.

Jan Václav Novohradsky of Kolowraty bought the castle in 1675 and thus a significant part of the castle territory belongs to the property of the noblemen of Kolowraty. The nature reserve Přimda below the castle, which was established in 1998, belongs mostly to the Kolowrat woods.

Due to its location the castle was never much settled and all the craftsmen always lived in the lower castle. On the other hand the location of the castle was perfect in terms of fortification. Today only a tower remains from the original castle, in which the burgraves, or owners of the castle, used to live.

In 1962 the ruins of the Přimda castle were recognized as a national cultural monument and it belongs to the property of the town of Přimda. The ruins are surrounded by the Přimda nature reserve with unique beech tree covers on its steep rocky hillsides.