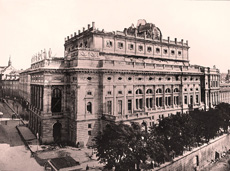 In keeping with the family motto, “Faithfully and Constantly”, the Kolowrats also devoted themselves to the fulfillment of public benefit projects. They always promoted education and culture, helped people in difficult social and health circumstances, and actively participated in the development of the regions in which they were active.

1379-1380 - Albrecht the older of Kolowrat together with his three sons Albrecht the younger of Kolowrat, Purkart and Herbort co-founded the Augustinian Monastery in Dolni Ročov, which they then continued to support financially.

1465 - Hanuš II. of Kolowrat donated his silver, precious-jewel inlaid Kolowrat plenary, along with relics of Czech Patrons, a chalice with paten, and an embroidered chasuble to the Saint Vitus Cathedral Treasure. To the Chapter Library, he donated the rare illuminated manuscript of his travel breviary and other incunabula.

1620–1700 – During his lifetime, Count František Karel I. Kolowrat-Liebsteinský financially supported the Catholic Church, primarily by the construction of many Church buildings.

1628–1650 – Count Oldřich František Kolowrat-Liebsteinský was a patron of the Catholic Church. He was present, for example, at the founding of the Capuchin monastery in Sušice, supported the establishment of the Jesuit College in Klatovy, Březnice and in Hlohov.

1654 – Count Václav Kolowrat-Liebsteinský gave his property to the Communion of Jesus and decided to live in poverty. He allocated all of his finances amounting to 178,500 zloty for the construction of the Cathedral of St. Nicholas and the Professional House in Prague, Lesser Town.

1689 – Count Maximilian Norbert Kolowrat-Krakowský contributed 20,000 guldens for the repair of damages to the Jesuit college, gymnasium and seminary in Klatovy after the departure of French soldiers.

1691 – The fifth wife of Count Vilém Albrecht Kolowrat-Krakowsky, after becoming a widow, devoted herself to charitable activities and caring for the Prague Hradcany Loreto, which the Count himself very much supported with his fourth wife, Alžběta Apollonie Tserclaes Tilly. Ludmila Eva Františka Hieserlová of Chodov had built here the chapel of St. Joseph, and in her will of 1695, bequeathed her wedding dress, studded with more than 6,500 diamonds, to the Loreto Treasury. In 1698, a beam monstrance, known as the Prague Sun, was made from the diamonds.

1818–1861 – Count František Antonín II. Kolowrat-Liebsteinský was present at the founding of the Patriot Museum (today, the National Museum), to which he bequeathed library numbering 35,000 volumes and a collection of minerals. During his lifetime, he helped a number of Czech art and science groups, and financially supported the publication of many books.

1818–1872 – Count Jan Nepomuk Karel (called Hanuš) Kolowrat-Krakowský-Nowohradský was present at the birth of the Patriotic Museum (today the National Museum) and bequeath to it some of his collections and the Březnice library with many rare first printings and illuminated manuscripts. He supported Czech writers, such as Božena Němcová and Karel Havlíček Borovský, among others, and was responsible for establishing a foundation for the poor.

1824 – Count František Josef II. Kolowrat-Liebsteinský stood at the birth of the picture gallery of the Association of Patriotic Friends of Art (today’s National Gallery), and donated their extensive collection of paintings to it.

1920 – Count Alexander Joseph Kolowrat-Krakowský helped to financially secure car racing on the track in Gugging, and also financially supported Laurin & Klement manufacturing, which had been weakened after the First World War.

Count Jindřich Kolowrat-Krakowský (1897–1996) and his son, František Tomáš Kolowrat-Krakowský (1943–2004), who returned from American exile after 1989 took up this tradition. Their aim was not merely restitution of property, but also to provide active help in the economic and social development of democratic Czechoslovakia and later of the Czech Republic, to which they could offer their vast experience. As soon as they reclaimed management of their property, they began to work not only on the recovery and rebuilding of the estate of the Lords of Kolowrat, but immediately willingly and gladly provided beneficial community service.

1997 – Count František Tomáš Kolowrat-Krakowský purchased three new bells for the building of the Romanesque Church of St. George in Přimda, as a replacement for the original bells, which were destroyed in the Second World War.

2008 – Maximilian, Francesca and Dominika Kolowrat- Krakowský established the Kolowrátek Endowment fund, which, through its public benefit activities is continuing the patronage tradition of the Kolowrat-Krakowský family.