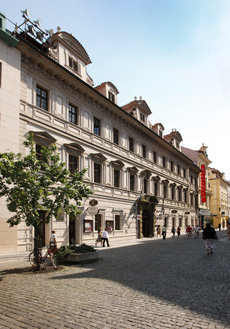 The present-day palace consists of two Gothic houses. The first house became the property of the Kolowrat family in 1670 and the second in 1697. The high Baroque reconstruction of the first house was probably based on a design by Giovanni Domenico Orsi and took place in 1670. Reconstruction of the second house started in 1697 and was finished in 1725.

Only the main, street wing, has been preserved up to the present from the originally four-winged palace. On the ground floors are located the original vaults from the early Baroque period and the first floor rooms are decorated with early Baroque painted wood ceilings.

In 1993, Count Jindřich Kolowrat-Krakowsky (1897–1996) rented the Kolowrat Palace to the National Theatre for a symbolic amount of 1 Czech Crown for a period of 20 years. The chamber stage of the Kolowrat Theatre is located in the attics of the Palace.