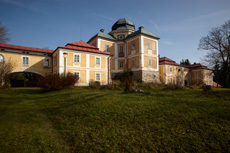 The Hunting Lodge Diana, named after the Greek goddess of hunting, stands on the hill in the centre of the Tachov area of the Kolowrat woods, in the middle of an English garden. The first reference to this mansion comes from 1742. At that time it was already a residence of the noblemen of Kolowraty, who came to the Přimda region in 1675. Jan Václav Novohradsky of Kolowraty (1638–1690), who received the title of Count in 1660, bought the Přimda estate together with the historic castle, which he attached to the estate of Velké Dvorce, and built a new residence there. The Hunting Lodge Diana was likely built by his son and grandson, František Zdeněk (1659–1716) and František Václav (1689–1738), who moved their residence here. The hunting lodge was built in the first half of the 18th century, supposedly according to a design by the famous architect Jan Blažej Santini-Aichel (1677–1723).

The central Baroque pavilion has a Greek cross plan, roofed with a dome that is crowned with a metal statue of a sitting deer. On the floor of the upper pavilion can be found murals depicting mythological scenes of the goddess Diana, as well as murals by the Dutch Masters. The central pavilion is connected to the side wings through roofed stone bridges.

The hunting lodge is surrounded by extensive English gardens full of rare wood plants – exotic coniferous trees, oaks, red beech trees, horse chestnuts, and many others. There is an avenue of ash trees in the southern part of the gardens and an avenue of elms, maples and linden trees in the northern part.

When Count Jindřich Kolowrat-Krakowsky had his property returned in 1992, the hunting lodge was in a very bad condition. Unfortunately, some of the architectural changes, made in connection with the retirement home, are irreversible. Mrs. Dominika Kolowrat-Krakowska has already taken the first steps in the long-term reconstruction. The adjoining settlement and the surroundings are also named after the hunting lodge ( in the earlier records also Dianaberg). The name has also been given to one of the forester’s districts of the Kolowrat woods, as well as to the hunting area and the mouflon game park.