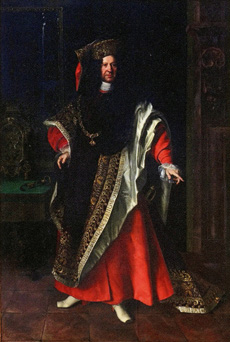 Norbert Leopold was the fourth son of František Karel I., Count Liebsteinský of Kolowrat (1620 – 1700) who was a knight of the Order of Golden Fleece, the Provincial and Regional Hetman, President of the Appellate Council, an eminent politician and diplomat, and of his first wife Magdalena Ludmilla of Oppersdorf (1625 – 1672). He had ten siblings out of whom he had the most successful career. He undertook a grand tour completed by a year-long stay in Italy in 1674. He became an Imperial Councillor and Chamberlain and an Envoy Extraordinary in Madrid in 1688 – 1690. He went on to become an elector in Cologne in 1690 and he completed his career in diplomacy as a Regular Envoy in the office of the Elector in Brandenburg from 1693 to 1694 in Berlin. He was awarded the Order of the Golden Fleece for his merits by the Emperor Charles VI. on 9th January 1712.

The count was the owner of the fideicommissum of Rychnov nad Kněžnou, Vamberk, Černíkovice and other estates. He expanded the Rychnov manor in 1704 by acquiring a large wooded area in the Orlické Mountains which had previously been owned by the Royal chamber. In 1703 – 1705, he was the encumbrancer of the castle and manor of Karlštejn. In 1707, he acquired the manor of Chlumec by Ústí nad Labem from the house of Krakowský of Kolowrat and he also acquired Zlonice in Northern Bohemia in the same year. He also made a conscious effort to keep expanding his East-bohemian estates by further purchases, such as the purchase of Přestavlky estate to expand his Chroustovice estate, and the purchase of Vamberk estate to expand his Letohrad estate.

Just like his father, Norbert Leopold was a sponsor of the catholic church. At the turn of the 17th and 18th century, he funded the refurbishment of churches in Letohrad and Chroustovice and had the churches in Těchonín, Uhersko and Kunčice built or renovated. It was thanks to his invitation, that Jan Blažej Santini-Aichel, the renowned baroque architect, came to Rychnov and designed the monumental front of the Holy Trinity church located above the new castle. Based on the architect´s designs, the count commenced the construction of the Piarist college in immediate proximity of the church in 1714. Unfortunately, only one of the wings of the three-winged building symbolising the Holy Trinity has been preserved to this day. The count also commissioned this architect to rebuild the monastic church in Dolní Ročov.

During his diplomatic mission in Berlin, Norbert Leopold extended his collection of fine art. In 1694, he had his portrait painted here by Jan Fr. Doun. This painting has been in the Kolowrat collection to this day. Upon Count Norbert Leopold´s death, his collection of paintings listed 134 exhibits, 44 of which were family portraits, and 11 portrayed the Habsburg royal family. These became the core of the later Kolowrat picture gallery which was relocated to the Rychnov nad Kněžnou chateau in 1745.

In 1682, got Norbert Leopold married for the first time to Johanka Magdalena, born Countess Hrzánová of Harasov, the widowed Countess Vítanovská of Vlčkovice (1649 – 1685), with whom he had a son František Karel II. (1684 – 1753) who was an excellent politician. Thanks to this marriage, Norbert Leopold became the owner of Letohrad. In 1691, he married his second wife Marie Magdalena Slavatová of Chlum and Košumberk (1673 – 1691), with whom he had a son Norbert Vincenc (1696 – 1727) and a daughter Marie Markéta (1693 – 1707). His wife Marie Magdaléna inherited a part of the property of the house of Slavata who had died out.