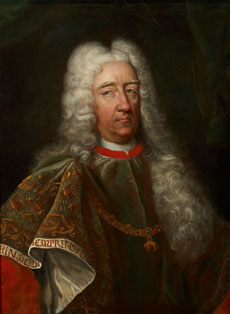 The supreme Czech and Czech-Austrian Chancellor, President of the Chamber of Court, First Minister of State and Conference Minister

Count Leopold Vilém became the founder of the Family line known as the Radenín or Hroby branch, having acquired Radenín through his 1st marriage. On 24 August 1750 he had married Maria Teresia del Carretto, Countess di Millesimo at Choustník castle (8 June 1729 in Měšice – 9 February 1769 in Hroby), whose dowry in addition to Radenín brought him Vlčoves and Zahrádka. Countess Maria Teresia was the daughter of František Václav del Carretto, Count di Millesimo (1698-1760) and Maria Anna Theresia, Countess Desfours zu Mont und Athienville (1706-1745), who was a Lady of the Order of the Starry Cross and a Lady of the Court.

In 1753 the couple Leopold Vilém and Maria Teresia Kolowrat-Krakowsky purchased the Hroby estate (3 km south-east of Chýnov and 13 km east of Tábor) adjacent to Radenín. The seller was František Antonín, Knight Koch, whose father František Jiří had constructed in the village near the Church of the Assumption of the Virgin a single-storey Baroque chateau on the site of a former 16th century Renaissance fortress. In 1759 the Count bought at auction the estate and castle of Oblajovice (7 km north west of Chýnov) and in 1764 added the Vrbice estate. Conversely, in 1765 he sold the Radovesnice estate with 2 other villages to Jan Václav, Count Rummerskirch.

Count Leopold Vilém completed the construction of the Baroque chateau in Filipov near Čáslav, begun by his father Filip Nerius. To the south of the castle buildings he also founded a large park, the main avenue of which was decorated with Baroque sandstone statues of allegorical months. This sculptural decoration has today dwindled down to the remnants of 4 statues. When in 1784 Emperor Joseph II abolished the local Chapel, it was probably Leopold Vilém who added two wings to the structure, giving it the look and feel of a small chateau.

In addition to the inheritance of the estate of Světlá nad Sázavou (1773) from his father, Count Leopold Vilém also bought the estates of Nová Ves, Pavlíkov and mainly Vilémovice (3 km east of Ledeč nad Sázavou), along with the castle that was sold to him in 1774 by Ignác Bechinie of Lažany. In 1777, the Count donated a very valuable death bell to the Church of St. Wenceslaus in Světlá, and continued to support the church financially, and even having the Kolowrat family tomb established there. From 1774-1775, Count Leopold Vilém initiated a baroque renovation at the chateau in Světlá nad Sázavou. Just before his death, a military hospital was founded at the chateau in Světlá nad Sázavou, in 1809, which wasn’t decommissioned until the year 1814. Not long afterwards (1817), the Hungarian Count Franz Josef Zichy of Zich and from Vasonykeö purchased Svetlá, Novy Ves and Vilémovice.

The most significant economic achievement of Count Leopold Vilém was on his estate in Jeníkov, today’s Golčův Jeníkov (Goltsch-Jenikau), which he also inherited in 1773. After the abolition of the Society of Jesus in the same year he bought up the religious estates and in 1773 he founded the parish and school. He used his influence and secured for his estate the state manufacturing rights for tobacco. He therefore had two buildings built in Jeníkov, known as the Upper and Lower chateau. The Jeníkov factory was larger than that established almost concurrently in Prague (1785). The Count was then to obtain an annual rent of 6,000 gold pieces. The Family resided in the nearby chateau of Hostačov. The ‘Old’ (Lower) chateau is a three-winged layout, built south of the old fortress in the years 1774-1775 as a base for managing the estate and accommodation for the estate officials. The ‘New’ (Upper) chateau consists of a rectangular building in the southern vicinity of the ‘Old’ chateau, also built in the years 1774-1775, but not as a chateau, but as the state tobacco factory. In so doing, Count Kolowrat secured jobs for the local populace, and hence their relative prosperity. The factory processed smoking tobacco and snuff. In Jeníkov, the Count founded a needle factory, the first of its kind in the whole of Europe, and advocated modern methods of agriculture on his estates.

He instituted the grandson of Leopold, Count Kolowrat-Krakowsky, his son František Xaver, as his universal heir, which the other descendants challenged through the courts. During the succession dispute the estate management fell into administrative hands. The administration consisted of three members, who were not in agreement how to manage the estate. When on 1 November 1812 the lease on the factory production ran out, it was relocated (on 2 November 1812) into the building of the abolished Cistercian Monastery in Sedlec near Kutná Hora. Also, the needle factory ceased operation soon after the death of its founder, which meant a loss of livelihood for many local people. In 1813 the former tobacco factory premises turned into a military hospital. In 1817 agreement was finally reached between the legal heirs, who agreed to sell the estate (along with Hostačov). Everything was bought at auction by one of the heiresses, the daughter of the late Leopold Vilém, Maria Aloisia (1780-1823).

Leopold Vilém, Count Kolowrat-Krakowsky was first and foremost a statesman and politician who surpassed those around him in learning, skills and experience. He thus became a favourite of the Empress and Queen Marie Theresa, who even wrote letters to him in her own hand. He enjoyed the same degree of confidence from other monarchs – Joseph II, Leopold II and Francis II. (I.). As the supreme Chancellor, he took part in the coronation of Leopold II as King of Bohemia (6 September 1791) and of his wife Maria Ludovika (12 September 1791).

As part of his centralization efforts, Joseph II rationalized political and financial management into one huge office, at that time the conjoined Czech-Austrian office, courtly chamber and treasury, at whose head Count Leopold Vilém was instigated. Shortly before the death of Joseph II in 1790 the management of foreign policy was taken up by a panel of statesmen (Václav, Count Kaunitz-Rietberg; Maurice, Count Lacy; Karel, Count Hatzfeld; Leopold Count Kolowrat-Krakowsky; Franz, Count Rosenberg-Orsini; Georg, Count Starhemberg and Karl, Count Zinzendorf) aiming to thwart the ongoing Prussian offensive against the Danube monarchy. In connection with the coronation of Leopold II (1791), Count Leopold Vilém averted a more pronounced extension of the Regional Assembly to townsmen. He went on to persuade Franz II to fully repeal this proposal. The Count also persuaded the Emperor about the need to abolish the State Council established at one time by Count Kaunitz and to concentrate the entire internal political agenda under the Office of the First Minister. In view of his advanced age Count Kolowrat was sent into retirement in June of 1808.

He died in Vienna (the parish of St. Michael), but was laid to rest in the Family tomb in Hroby.