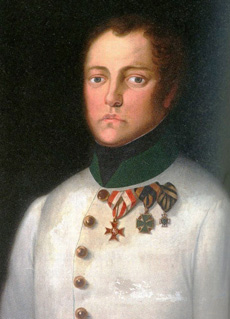 The youngest son and last child of Leopold Vilém, Count Kolowrat-Krakowsky and his 2nd wife Maria Theresia, Countess von Khevenhüller-Metsch (1741-1805). He was the founder of the IVth line of the House of Kolowrat-Krakowsky, the only one flourishing to this day.

In the Krakowsky-Liebstein Kolowrat castle picture gallery in Rychnov nad Kněžnou among the 258 paintings (portraits, still-lives, landscapes) also hangs a portrait of Julia (Juliana, Countess Kolowrat-Krakowsky, depicted as Hebe) as the Greek mythology personification of youth in all its glory. The painting is oil on canvas by an unknown Viennese painter dated around 1815.

At the time of the Napoleonic wars, Count František Xaver served as a Guardsman, in the rank of Major in the Noble Guard of Emperor and King Franz Joseph I. The 38 strong guard (aristocrats of the Czech provenance), accompanied the King on his military campaigns. The badge of membership was the now very rare Czech Aristocratic Cross (Das Böhmische Adelskreuz).

After the wars, Count František Xaver sold the estate and castle in Filipov to the Hungarian nobleman Franz Zichy. Today’s neo-Gothic appearance of the chateau, estate courtyard complex and the whole village is the work of Emilie Boleslavská Ritterstein, née Eisenstein. The remodelling took place in the years 1863-1865, the only remnants of the original Kolowrat baroque castle being the perimeter walls in the central section.

In 1841 the Budkov estate farm was divided up between the spouses František Xaver and Julia Kolowrat-Krakowsky. Some 8 years later (1849) František Xaver passed this estate on to his children, Theodor, Leontina (married Kressová), Xaverina (married Dubská), Valerie (married Zichy), Julie (married Erdödy) and Maria Leokardia, in joint ownership. These 6 siblings then sold Budkov in 1853 for 400,000 gold pieces and 800 ducats to Karl, Prince von Liechtenstein († 7 April 1865), who then in 1859 had this estate placed in trust (fideicommissum) for the second-born sons of the Princes of Liechtenstein.

Both spouses were buried in Budkov.