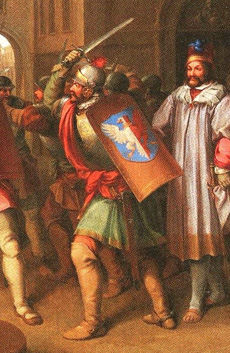 Albrecht the older Lord of Kolowrat

Documented and certificated genealogical succession of Lords of Kolowraty begins with Albrech the older, about whose parents we only know that they had a daughter Pribyslava (†1379) as well. The origin of the family is, however, hidden somewhere in shadows of antiquity. Historian recorder Dalimil regarded duke Vlastislav of Lucany as the first ancestor of the family, but there is no way to prove it today.

Several lord Albrecht´s seals were preserved and especially intact seal from 1378 shows that he was using eagle in the shield and had two eagle wings in the jewel, the same symbol the Kolowrat family uses up to the present days.

Frantisek Palacky indicated all families using eagle in their symbols as Janovic and from this family tree cut off many other families. Namely the lords of Janovice, of Winterberg, of Adlar, of Zirotin, of Zdar, Cejkas and Dvoreckys of Olbramovice and of course the lords of Kolowraty.

According to tradition and archive documents the Kolowrat family comes from the late 13th century and its birthplace is near from Uhrineves near Prague where fortress once stood. According to this forgery, the member of the family Zosimir of Kolowraty and of Pruhonice is mentioned in 1297.

Albrecht´s name appears for the first time in historical materials in 1347 when he was among the witnesses of Rozmital sale and two years later (1349) he is mentioned as burgrave in Kadan. Since 1352 he was the owner of Rocov.

In 1355 he accompanied Czech king to the imperial coronation to Rome. He experienced many adventures and dangers on the journey. On the return they even had to fight the rebels in Pisa for their lives. It was then he made a vow that if he survives, he would found the St. Augustine´s order a monastery that he later did.

Lord Albrech was married three times and according to the available sources has fathered eight children with his wives. His first wife was a woman with unknown first name with the predicate of Hrivice. With her he fathered Jesek (mentioned in years 1357, 1362 and 1363) and Anezka (mentioned 1367). But his first wife was already dead in 1362. He remarried to Anna of Seeberg who is also known as Anna of Slavetin (mentioned in years 1375 until 1380). The exact date of their wedding is unknown. According to tradition in Dolni Rocov monastery they both longed for male offspring.

They both independently had a dream in which the Virgin Mary appeared to them. She revealed to them that they have to found the monastery close to Ročov fortress at a location bordered by gold thread. According to another version the place was supposed to be covered with snow even though it was summer.

The couple really had their awaited male offsprings, from out of five children they had four sons:

Karel the Fourth confirmed the intention to found the monastery on January 2nd, 1373 and Pope Gregory XI on September 10th, 1374 in Avignon. Lord Albrecht agreed with the Augustianian order´s provincial Leonard de Villaco on securing the future monastery, on convent staffing and on other monks´ obligations. The founder has promised to build the monastery and secure it economically. He did ensure the rights of availability and supervision of the monastic estates.

On August 6th, 1380, lord Albrecht of Kolowraty together with his three sons Albrecht he younger, Purkart and Herbort issued founding charter for already existing monastery.  They provided land assets, salaries and benefits in kind. It is interesting that among the monks´ duties were within five daily worships two masses for the sins of Lord of Kolowraty and for all whom he did hurt in some way. According to monastic administration Albrecht also donated Gothic statue of the Madonna with child (1,25 cm tall) that is now located on the main altar in Dolni Rocov. After the death of Anna of Seeberg, Lord Albrech remarried for the third time, this time to Anezka of Svamberk, sister of Busek of Svamberk.

Albrecht the older of Kolowraty died on July 5th, 1391 and was buried in Dolni Racov in convent´s temple of Augustinian Hermits. The tomb was originally located in the center of the nave and was famous for its „sweating“ ball. In 1750 it was within the adjustments to the church floor moved to the side of the nave.