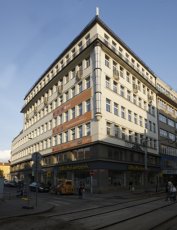 One of the palaces of the German Insurance Company Donau, which was built between 1927 and 1928, at the corner of Purkyňova Street and Spálená Street. The designer of the building, which replaced the two-storey Classicist house Five Roses, was the prominent Czech architect Adolf Foehr, student of Jan Kotěra.

An elegant functionalist building shaped like a steamboat, with 9 above-ground floors and one subterranean floor. The upper floors used to contain apartments upper floors, with the rest of the building being used for administrative operations.

The simple facade with a bold horizontal structure is freshened up by shellshaped balconies. The construction was made by the construction company of A. Möse. The interiors of the Aventinum Bookstore, located on the ground and first floor of the building, as well as its unpreserved logo on the facade, were designed by Bedřich Feuerstein, a former member of the Devětsil.

In the house standing in this place, lived and died the Czech philosopher and biologist Jan Evangelista Purkyně (1787–1869) along with his son, the excellent painter K. Purkyně (1834–1868).

The house was renovated several times – in 1935, 1946, 1952, 1955 and, for the last time, from 1992 to 1994. After the last reconstruction it became an administrative complex connected to the neighbouring buildings by a shopping mall with a theatre, a coffee shop and a restaurant.

It became part of the Kolowrat Houses in 2010.

Adolf Foehr was an important and exceptionally prolific, traditionalist-oriented architect in Interwar Czechoslovakia. In the 1920s and 1930s, he built a large number of buildings in Prague and in the former Sudetenland. Foehr graduated from the Deutsche Technische Hochschule in Prague, and subsequently also graduated from the master school at the Jan Kotěra School of Applied Arts and continued his studies at the Federal Technical University in Zurich. Already in the course of his studies in Switzerland, he successfully participated in architectural competitions in Prague, where he won two grand prize awards.

Upon his return to Prague in 1908, he founded an independent architectural studio in Holešovice. His oldest known projects are the buildings built after 1910 in the Art Nouveau style – such as the bank building in Politických vězňů Street. Later, he worked in the neo-classical purist style – an example of which is the extensive office building of the Ringhoffer plant above Smíchov Train Station. In the 1930s he arrived at the typical, for him, style of constructivism. He was particularly successful with German industrialists and financial institutions. He was awarded the title of the building council and became the "court" architect of the Donau and Securitas insurance companies, as well as the German Agrarian and Industrial Bank and the Union Bank.

In Prague, he mainly implemented large banking and office buildings, and has also built a large number of apartment buildings. Foehr’s most successful work can be considered to be the Donau Palace on Národní třída Street (No. 138 / II), where he adopted Josef Havlíček’s original concept for the façade. Additionally, very highly regarded are the Brandejs department store at the corner of the Havířská and Provaznická Streets, in the Old Town and a residential block in U Smaltovna Street in the Bubny district of Holešovice. He was also a member of Schlaraffia.