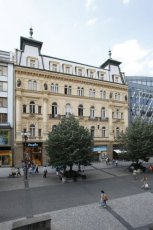 The Neo-Renaissance business palace was built between 1881 and 1884. The monumental facade of the house has always been one of the most attractive in Na Příkopě Street.

Between 1839 and 1870 the street was named Kolowrat Street, after František Antonín II. Count Kolowrat-Liebsteinsky, the Prague Supreme Burgrave. The Neo-Renaissance Kolowrat House, Building Identification Number 1047, at Na Příkopě Street 17, was built between 1881 and 1884. The monumental facade of the house has always been one of the most attractive in Na Příkopě Street. In its beautiful basement there used to be a fuel storehouse , as well as the beer cellar of the famous pub U Piskáčků. The newly renovated basement now consist of five connected halls and serves as a venue for social meetings, exhibitions, seminars, conferences, etc. The capacity of the halls ranges from 50 to 250 people.

The building called “Little House” is located on the building lot no. 574 in the cadastral territory of Prague Old Town. The building adjoins the above-mentioned house at Na Příkopě 17, and for decades it served as the administration building of the Dětský Dům.

The original five-storey house was in poor technical condition and in need of reconstruction. The reconstruction started on 1 July 1996 and ended during the winter of 1997. Its current design was fully adapted to the design of the neighbouring house. A three-storey extension was made during the reconstruction. The last two floors are built into the attic. . Today the building serves as a medical clinic for plastic surgery, dermatology and dental medicine.